In 1987, The National Women’s History Project requested that Congress establish March as Women’s History Month and on March 12th that same year, it became officially declared as a month-long celebration in the United States.

From historic sites to women-owned farms, all month long we are celebrating the extraordinary, and ambitious women who have contributed to the history, innovation, and culture of Montgomery County, Maryland.

Visit the National Capital Trolley Museum “Women in Transition” Exhibit
The National Capital Trolley Museum highlights the deep history of trolleys, streetcars, trains, and more through historic photographs, life-size models, and videos. During Women’s History Month, the museum celebrates women through their “Women in Transition” exhibit.  Learn about women’s fashion changed how street cars were built. Then head over to the Children’s Desk for “Women as Street Car Conductors, Including Maya Angelou”, where you can explore how women broke into a male only role due to staffing shortages during World War II.

Explore the Rachel Carson Conservation Park
Rachel Carson was a marine biologist, conservationist, and author who wrote the book Silent Spring, which ultimately contributed to the advancement of the global environmental movement. During the last few years of her life, she called Silver Spring, Maryland home and spent her time studying various environmental threats such as pesticides and other spraying programs involving harmful chemicals.

Her passion for nature and the environment lives on through the Rachel Carson Conservation Park. Named in her honor, the park is one of Montgomery County, Maryland’s premier conservation areas and includes six vibrant miles of natural surface trails that are perfect for hiking, walking, running, and exploring.

Pick Your Own Bounty at Butler’s Orchard

A Silver Spring native, Shirley Butler (also known as Mrs. B) and her husband George Butler purchased the original 37 acres of what now is known as Butler’s Orchard in Germantown, Maryland. They were known as the originators and pioneers of the “Pick Your Own” produce business and opened the farm publicly in the 1950s. Today, Butler’s Orchard offers more than 25 varieties of fruit, vegetables, flowers, trees, and herbs across the farmland, along with many family-friendly events throughout the year.

Shirley was the proud matriarch of her family. She oversaw every phase of development and growth on the farm, teaching and nurturing second and third generation Butler children into the family business. She never really retired and was often spotted out on the farm on her golf cart with her beloved dog Dakota by her side.

VM Team Fact: There are 492 female farmers in Montgomery County, Maryland. This makes up 48% of the total county producers in the area.

Experience Anna Maria Weems Journey at The Underground Railroad Experience Trail
Anna Maria Weems was born into slavery in 1840 in Montgomery County, Maryland and is known for gaining her freedom by dressing like a man and risking her life to escape. On September 23rd, 1855, Anna Maria ran away to Washington, DC at just fifteen years old. There she spent time with relatives who had been separated from her early on in her life to craft a plan for her escape. She traveled to Philadelphia by carriage and met William Still, a principal conductor of the Underground Railroad, who helped her get to Brooklyn. On the final stretch of her long and exhausting journey, she traveled by train to Canada to meet her aunt and uncle who settled there years earlier. Anna Maria Weems was a free woman and called Canada home for the remainder of her life.

There are many others with stories similar to Anna Maria Weems that focus on their dangerous journeys to freedom. To understand the freedom seekers voyages, visit The Underground Railroad Experience Trail at Woodlawn Manor Cultural Park to experience the journey first hand during a guided hike that allows you to follow the path that freedom seekers took to the North.

Share how you celebrate Women’s History Month with us by using #MontgomeryMoment or tagging @VisitMoCo in your photo. 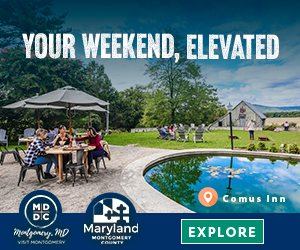 From fireworks to live musical experiences, there are plenty of activities happening all weekend long in Montgomery County, Maryland. We’ve...

On June 25th and 26th, in collaboration with Visit Montgomery, Heritage Montgomery will be hosting their 23rd Heritage Days celebration,...